Glastonbury happened this past weekend and Sir Paul McCartney had a couple surprises up his sleeve; Foo Fighters frontman Dave Grohl joined him onstage (his first public appearance since the death of Foo drummer Taylor Hawkins) on the Pyramid Stage for a garage rock version of The Beatles’ “I Saw Her Standing There” and Wings’ “Band on the Run”.

Here’s how Dave Grohl was introduced onstage by @PaulMcCartney at Glastonbury this evening. pic.twitter.com/1cKrYODuBE

Before bringing Grohl up, McCartney told the crowd, “This guy flew in specially to do this” and after the performance Grohl said, “but I swear, I would never miss being here with you right here, right now.” 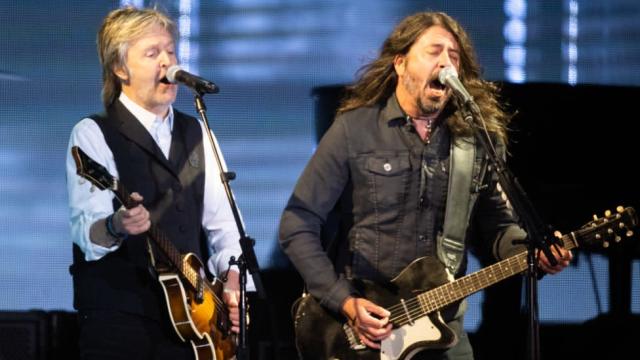 After Grohl jumped onstage, McCartney brought up Bruce Springsteen to play The Boss’ “Glory Days” together. They also played “I Wanna Be Your Man”.

This past weekend was McCartney’s second time headlining Glastonbury (the first in 2004).

DAVE GROHL IS ON STAGE WITH PAUL MCCARTNEY. #GLASTONBURY pic.twitter.com/fwlzKF25Wp

Dave Grohl has only turned up with @PaulMcCartney @glastonbury #glastonbury2022 pic.twitter.com/kEbNl409XC

Springsteen…the Boss is here now! Fuck me! Too many legends on 1 stage @PaulMcCartney @glastonbury #Glastonbury pic.twitter.com/rK1oRSNkje

What’s your favourite festival you’ve been to? Personally, Lollapalooza ’92 tops ’em all!