The new episode of AC/DC singer “Brian Johnson’s A Life On The Road” (on AXS TV) has Johnson hanging out at Metallica’s headquarters in San Rafael, California. It airs on Sunday, October 13 at 6pm PST.

Above is a first look at the episode – Ulrich shares his love of AD/DC and remembers Metallica going on tour with them in the early 90s.

“You’ve gotta remember, our musical roots were in AC/DC, Deep Purple, Led Zeppelin. Playing with you guys on that run in 1991, which was the last time we really sort of supported anybody, we were in heaven getting a chance to be close to you guys and watch you every night for six weeks.” 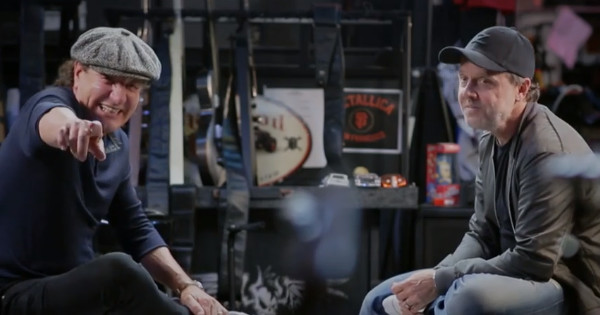 A reason to get AXS TV. “Brian Johnson’s A Life On The Road” airs Sundays 6p PST. October 20th episode has Johnson sitting down with Pink Floyd percussionist Nick Mason!

Pretty cool to see major rock stars interviewing other rock stars. Who else would you like to see step into the interview arena? QOTSA singer Josh Homme’s Beats 1 radio show is worth checking out.