AC/DC has fired up their rescheduled North American tour dates with GnR singer Axl Rose on vocals — started up Saturday night, August 27 at the Greensboro Coliseum in Greensboro, North Carolina. 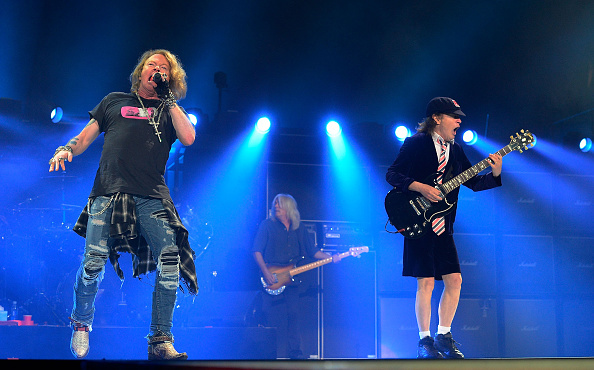 (Photo by Jeffrey A. Camarati/Getty Images)

Killer set list. *(Watch a bunch of the videos below).

Meanwhile, Ex-AC/DC drummer Phil Rudd told “Bay Of Plenty Times” that he’d go back to the band and is focusing on a solo career.

“If Angus [Young, AC/DC guitarist] wanted me to play, then that is up to him… but I don’t really want to play with Axl Rose [current AC/DC touring vocalist]… I don’t really rate him.”

Rudd added: “Geoffrey [Spencer, who plays in Phil’s solo band] is a great guitarist, just as good as Malcolm [Young, retired AC/DC guitarist], [and even] better than [him], if you ask me.”

Assuming neither Rudd nor singer Brian Johnson return, when Cliff Williams’s retires, it will leave only Angus Young as the sole original member remaining.