August and September 2018 were big months for Black Keys’ drummer Patrick Carney. His wife had a baby on August 28th. And on September 5th, he and singer Dan Auerbach went into a recording studio to work on “Let’s Rock“, their first album in five years. And apparently they’re heading to a studio to do it all over again! And, they’ll soon tour US arenas with Modest Mouse. 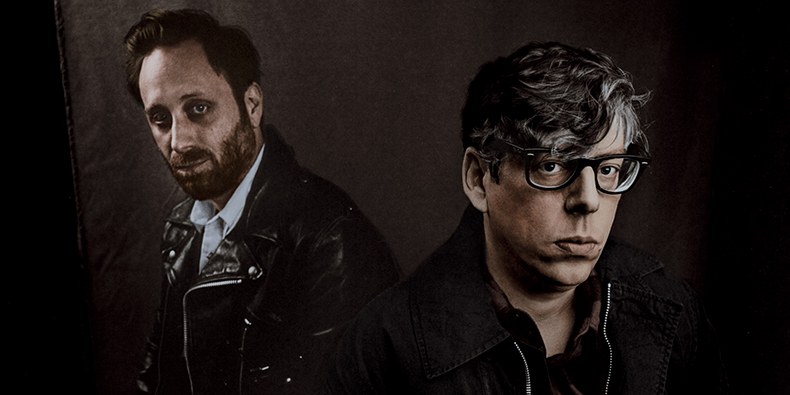 Carney recently sat down with Rolling Stone magazine to talk about Let’s Rock.

To what extent was this album a reaction to your last one, Turn Blue?
With such a decent-sized break between records, the last one really didn’t have much to do with this one. The last record has a more dramatic, more serious tone. I think that we’d gone through a lot in the couple years leading up to Turn Blue. A lot of it was positive, and some of it was negative. And I think Dan had some real personal stuff going on with the divorce and things like that. And I think it started off as more of a mellow kind of record. It’s been six years since we made that record! I can’t even remember.  I can kinda remember making [2003’s] Thickfreakness. There was no thought involved — the thought was just, “These are the songs we’re writing.” And I think we’ve always tried to be in that zone. Even on Turn Blue, it was just like, “Oh yeah, this is just what’s coming out. It’s what we’re gonna do.”

So, for this record, I think there was no discussion about what we wanted to do. And neither one of us had been in the studio with each other since 2013. So it was a five year break between working. We’ve both been in the studio a bunch since then, but for whatever reason, I think we’d just taken some time apart from working with each other. And I think initially, I wasn’t really apprehensive if we were gonna be able to get anything cool, I just was more apprehensive about how Dan wanted to work and how I wanted to work and how that was gonna jive. And we just fell right back into it really, day one. We wrote two songs the first day. And after three weeks of it, we got halfway through the record, maybe a little bit further, and then we decided to take a break for a couple weeks, not to put pressure on ourselves. And we just slowly chiseled up the record, here and there, through the rest of the fall.

You did the usual thing where you come into the studio with nothing written, right?
That’s basically how we’ve always done it, yeah. And that’s what we did here. Pre-production is really good for certain bands. Certain bands really need to do it. And I encourage a lot of bands to do it. But essentially the way that Dan and I write is how we record. We recorded our first two records ourselves anyway. But I think we just have this thing like, “OK, what we’re making now is just gonna be the final song anyway, so what’s the point of going back and fucking with it?”

Certain records, we have done pre-production, like Attack and Release, and Brothers, to a certain degree, for like four or five songs on that record. But you know, when I work with a band, depending on how quick the band is, if I’m producing, I prefer to work the same way that Dan and I do. I prefer to just start from scratch.

How much did you think of the context of a rock album in 2019 when you made it?
Our mentality was: “Let’s just make something that we like, and hope that people like it.” And that’s what we did. We didn’t think about the context of the state of music in 2019, which is very complex and freaks me out. No I liked really got played on the radio from 1994 to 2001. None of the bands I liked were really getting played on the radio anyway. And I just have faith that there’s some stuff brewing underneath that is really good, I know that to be the truth. But you know, as far as what’s considered alternative and things like that, things are changing, things are moving. I just find myself listening to more direct- sounding shit. Like if I put on The Damned’s first record, it makes me feel good.

Were the charts on your mind at all?
To be completely straight with you, when Turn Blue came out, after all the work we put in, and all the luck that had happened to get us into the position to potentially have a number one record, I really wanted it. I wanted to have a number one album. It meant something to me. And what’s changed since 2014 is, if I look at the charts, there’s so much streaming manipulation. And if you look at, how is it that artists can have, like, a billion streams, but can’t sell out an arena in Sacramento? You know what I mean? Like, what the fuck’s happening?

Do you think Black Keys will top the Billboard album chart with this new album?