Suicidal Tendencies has set September 30th as the release date for their as-yet-untitled new album. 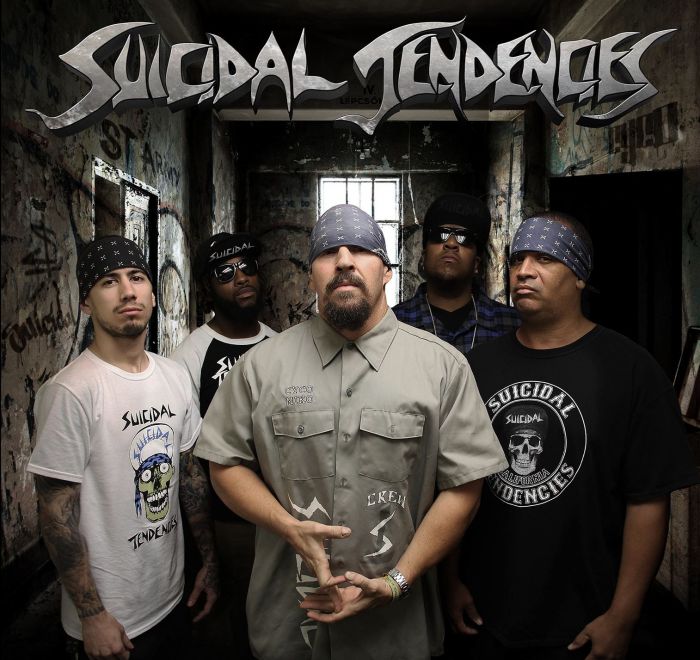 The follow-up to Suicidal’s 2013 album “13” will be their first to feature former Slayer drummer Dave Lombardo and guitarist Jeff Pogan, who replaced Nico Santora last month.

Lombardo recently told Metal Wani about the new album: “I think it’s very typical and very traditional Suicidal Tendencies. It’s that style. It’s Mike Muir and he was a very special style in which he writes his music and his lyrics and his structures. And I love it; I love it. It takes me back to how it all started, which was that punk attitude. I’m very happy to be a part of his organization. I feel very welcomed. I feel very much appreciated, and there’s a lot of respect amongst the musicians, and camaraderie. We have a really good time together. We hang out as a band, which is important; I feel it’s very important.”

In an interview with John The Ninja, Muir spoke about how Suicidal fans have reacted to Lombardo’s addition to the band’s touring lineup. He said: “Well, I think there’s two parts. One, there’s obviously… there’s a name, so people were excited. Initially, obviously, people said, ‘Oh, wow! Actually, I can see that.’ The other is when you actually see it and you hear it. And there’s a lot of times when people quote-unquote get together and it’s for fun and they don’t take it serious. The thing about Dave is he’s very serious. It’s not for me to quote him, but he loves the band. So he goes, ‘I love the music,’ and you see that when he’s playing. I can’t fake what I do; he can’t fake what he does. He’s up there and just doing his thing. And it sounds so good, and it’s so fun. I mean, that’s one of the things with this tour [the recently completed North American run with Megadeth]; it’s just refreshing that it’s, like, ‘Bam!’ We just do it. And every night, there’s the people that obviously are anticipating it; there’s the people that are excited about it; the people that are, like, ‘Okay. I’m gonna check it out.’ And still to this day, some people don’t know. Even yesterday, I went out in the crowd afterwards, and someone was, like, ‘Man, your drummer is amazing!’ And I said, ‘Yeah. Dave Lombardo.’ ‘Yeah, I know Dave Lombardo. That was Dave Lombardo?’ I mean, it was a big place and they are in the very back and you can’t really see it.”

He continued: “It’s been great. It works. He’s a great person. So it’s just been a lot of fun. And it definitely does add an intensity. I mean, going years back, I’ve always known, obviously, Slayer and Dave, and I’ve always kind of said, ‘Wow! If we had someone like Dave playing [with us].’ You know, you do those little things sometimes in your head. And now we actually do.”