If you haven’t already binge-watched season 1 & 2 of “Stranger Things” on Netflix, start now and by the time you’re done (ya, right), you should be ready for season 3. You wish, gonna take a lil’ longer than that! Watch the trailer below!

There’s speculation the series will be released in 2019. Probably because back in Dec ’17, actor David Harbour (plays “Chief Jim Hopper) said you “probably won’t get [Season 3] until sometime in 2019” because the Duffer brothers had to write the script. He also told Insider that the theory that his daughter Sara died in Hawkins Lab MIGHT be true.

The “kids” are making bank too! Finn Wolfhard, Gaten Matarazzo, Caleb McLaughlin and Noah Schnapp get $250,000 per episode. Natalia Dyer, Charlie Heaton and Joe Keery will walk away with $150,000 per. Damn. 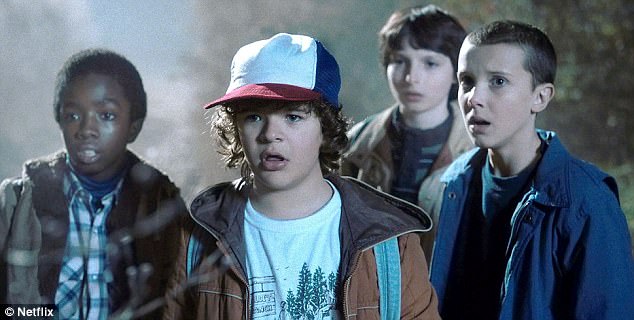 Executive Producer Shawn Levy told Glamour magazine it’ll be “an eight or nine-episode season.” We’ve since learned that it will be eight episodes and will likely be set during the summer of 1985.

Which means the kids are growing up. Which means… puberty!

Hold on, it’s about to get even more awkward!