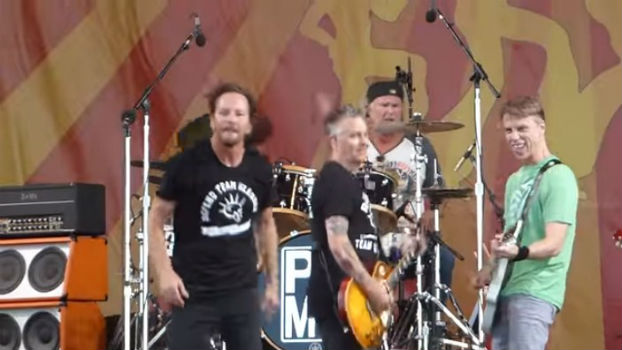 Pearl Jam headlined Saturday night of the festival and their encore included Red Hot Chili Peppers guitarist Josh Klinghoffer and drummer Chad Smith and Kings of Leon drummer Nathan Followill on stage for a performance of Neil Young’s ‘Rockin’ in the Free World’.

Pearl Jam recently cancelled their North Carolina show. They were set to play at the PNC Arena in Raleigh on April 20, but cancelled due to the state’s HB2 law.

If you hadn’t heard, earlier in April, North Carolina passed the state law which means individuals must use bathrooms corresponding to their biological sex, a move which negatively impacts on trans people.

Pearl Jam weren’t the only band to pull their show upon the news – Bruce Springsteen and Ringo Star also pulled their shows in protest.