The biggest prize in all of hockey may still be up for grabs, but the NHL has named the candidates for their biggest regular season award – The Hart Trophy. 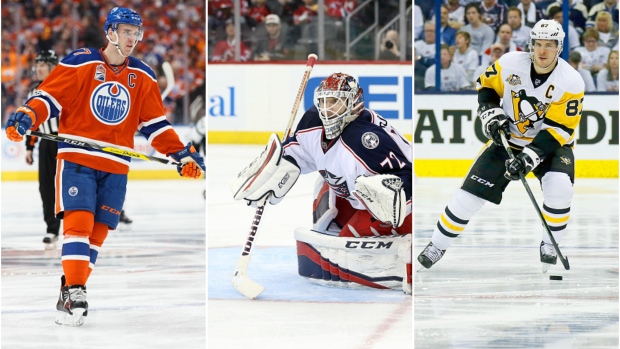 The Hart Trophy is annually awarded to the player judged most valuable to his team – the NHL’s MVP award. And this year the three finalists are ;

The winner gets announced on June 21st at the NHL Awards Show, the annual gala taking place in Las Vegas this year.
All three players have very strong cases to make for the Hart Trophy this year.

-Connor McDavid, at just 20 years old and in only his 2nd NHL season, led the league with 100 points this year as well as helping the Edmonton Oilers secure a playoff berth as the team finished with 103 total points. McDavid had the longest individual point streak this year at 14 consecutive games, and registered a point in 59 of 82 games (meaning there were only 23 games this year where McDavid didn’t score.)
Should McDavid win the Hart, he will join Wayne Gretzky and Sidney Crosby as the only players to win the Hart Trophy before their 21st birthday.

-Sidney Crosby was just nudged out of the Hart Trophy last year, losing it to Patrick Kane. This year, Crosby netted his 2nd “Rocket” Richard award, given to the player who scored the most goals in the regular season., with his 44 goals. (That’s also the second highest single-season goal mark in Crosby’s career, bested only by the 51 he scored in 2009-2010.) This is Crosby’s sixth nomination for the Hart Trophy.
Crosby already has two Hart trophies on his resume – a third would tie him with his rival, Alexander Ovechkin, as the only current NHL players with three Hart awards.

-Sergei Bobrovsky set a new Columbus Blue Jackets single season record with 41 goaltender wins this year. He led all goaltenders with a save percentage of .931 and a 2.06 goals against average. Bobrovsky also sits among the top five goalies in wins, shutouts, saves and starts. With Bobrovsky in net the Blue Jackets had their best season in club history. Bobrovsky also picked up a nomination for the Vezina Award, given to the NHL’s top goaltender – an award he won in 2012-13.
This is the first time a Columbus Blue Jacket has ever been nominated for the Hart Trophy.

We’ll find out who gets the award on June 21st, but for now, who do you think deserves the award?