The protest movement Colin Kaepernick started is rightfully growing and having a much needed impact on the conversation of racial inequality in America.

On Monday several players from the Cleveland Browns kneeled during the national anthem before their game against the New York Giants, it was the largest NFL protest since Kaepernick first took a knee in August 2016.

Among those participating were Isaiah Crowell, Duke Johnson, Jabrill Peppers, Christian Kirksey, Seth DeValve, Jamie Collins, Kenny Britt, Ricardo Louis and Jamar Taylor. DeValve is the first white player to kneel after Michael Bennett of the Seattle Seahawks called on white players to join the protests and bolster the effectiveness of the movement. DeValve is in an interracial marriage and stated he wanted to set a good example for his children.

There is every indication that the NFL is blackballing Kaepernick for conspicuously expressing his political views.  The season has yet to start and we are already seeing a dramatic increase of similar protests on the sidelines.

Many opposed to his Colin’s initial protest were offend he chose to do it during ‘The Star-Spangled Banner,’ a song that, in part, celebrates the murder of runaway slaves who fought with the British in 1812, according to writer and academic Jason Johnson.

“I am not going to stand up to show pride in a flag for a country that oppresses black people and people of color,” Kaepernick said while talking to NFL Media. “To me, this is bigger than football and it would be selfish on my part to look the other way.  There are bodies in the street and people getting paid leave and getting away with murder.”

Fortunately, in light of his continued free-agent status, Kaepernick has received support, not only from other NFL players, but from celebrities and military veterans.  A Change.org petition threatens an NFL boycott if a team doesn’t sign him for the coming season.

And on Saturday morning a surprising show of support came from retired and current New York Police Department officers during a rally in Brooklyn Bridge Park.  Filmmaker Spike Lee lent his support for a planned rally  Wednesday for the football star at NFL headquarters in New York. 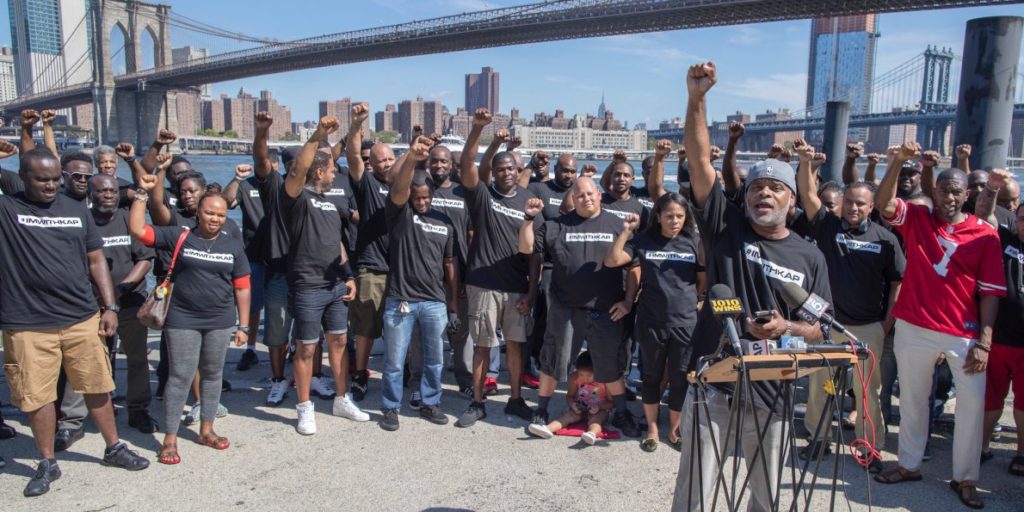 Though Kaepernick is receiving much needed and deserved support, it’s hard to ignore the blatant hypocrisy from conservatives when deciding who has the right to speak out against what they perceive as injustice in America.

The President of the U.S. has even taken credit for NFL teams refusing to sign Kaepernick. “Your San Francisco quarterback, I’m sure nobody ever heard of him,” Trump said at a rally in Louisville, Kentucky. “… There was an article today, it’s reported, that NFL owners don’t want to pick him up because they don’t want to get a nasty tweet from Donald Trump.  Can you believe that?”

“I think it’s personally not a good thing,” Trump told a Seattle radio station last year about Kaepernick’s protest. “I think it’s a terrible thing.  And, you know, maybe he should find a new country that works better for him.  Let him try.  It won’t happen.” Trump also said he believes Black Lives Matter has instigated the killings of police officers, calling the movement a “threat” and accusing the group of “essentially calling death to the police.”

Supporters of former San Francisco 49ers quarterback Colin Kaepernick, who refused to stand for the national anthem to protest police brutality against blacks, showed their solidarity with him and his cause at a rally outside National Football League headquarters on August 23rd, demanding that he be signed by the start of the regular season next month.