Who would’ve called this? The Mars Volta is back! They’ve woken up from their slumber and released an 11 minute new single / short film called “Blacklight Shine”!

As you’ll hear, “Blacklight Shine” has a Caribbean style vibe, as guitarist/composer Omar Rodríguez-López and singer/lyricist Cedric Bixler-Zavala hope to make a splash upon their return.

Bixler-Zavala says the lyrics of the songs help illuminate the idea of “a wave of rolling blackouts washing memories onto shore, a heartbeat that still remembers everything.” 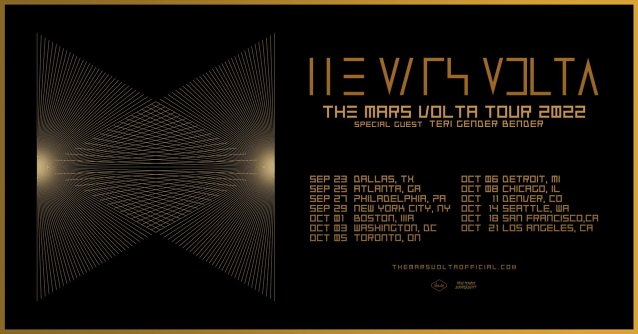 Meanwhile, The Mars Volta also announced a North American tour (their first live performances since 2012)! As of now, it starts up on September 23 in Dallas, Texas and wraps up a month later, October 21, in Los Angeles, California. Teri Gender Bender is the special guest on the tour.

Didn’t we do a story about The Mars Volta’s 18-LP box set “La Realidad De Los Sueños” last year? And how they sold their 5,000-print run in under 24 hours? Pretty sure we did.

This new is better.

They’re back. Tell everyone. The Mars Volta is back!