Black Sabbath are done touring. Their nearly five-decade touring career came to end on this past Saturday night (February 4) with a two-hour concert at the NEC Arena in Birmingham, England. 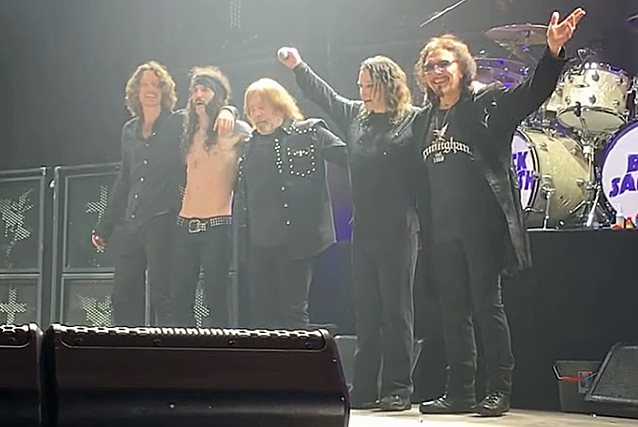 Ticker tape and balloons fell as Black Sabbath singer Ozzy Osbourne thanked fans for fifty years of support, “Thank you. Good night. Thank you so much!”

Guitarist Tony Iommi gave a thumbs-up to the cheering crowd.

You can find some good quality video at Sabbath’s Official YouTube channel.

Iommi said last fall that he wouldn’t rule out the possibility of doing one-off shows with Sabbath in the future, “I wouldn’t write that off, if one day that came about. That’s possible. Or even doing an album, ’cause then, again, you’re in one place. But I don’t know if that would happen.”

Sabbath’s “The End” tour was its last because Iommi, who was diagnosed with cancer in 2012 and is currently in remission, can no longer travel for extended amounts of time. He admitted: “It was only when I got ill, that’s when I stated getting vulnerable. Before that, I could do anything… And they’re going, ‘You shouldn’t be flying, really.’ And, ‘You shouldn’t be doing this, you shouldn’t be doing that.’ So that’s what brought that about — the end of this, really, because the constant touring does eventually get to you.”

The band got together in 2011 (without original drummer Bill Ward) to record a new album. Sabbath used singer Ozzy Osbourne’s regular touring drummer Tommy Clufetos for their live shows. Rage Against The Machine drummer Brad Wilk played the drum tracks on Sabbath’s album “13”, which came out in June 2013.